Paul Pogba encouraged by the arrivals of Cristiano Ronaldo, Raphael Varane and Jadon Sancho at Old Trafford; agent said nine months ago it would be best if the France star left the club; trophies can persuade the midfielder to stay, says boss Ole Gunnar Solskjaer

Paul Pogba has been impressed by Manchester United’s recruitment over the summer and is now more open to signing a contract extension.

Talks will continue between Pogba’s representatives and United over his future, with the France international inside the final year of his contract at Old Trafford.

It is understood that while no decision has been made, the 28-year-old is coming around to the idea of extending his stay in Manchester after seeing the arrivals of Cristiano Ronaldo, Raphael Varane and Jadon Sancho.

Ronaldo’s homecoming in Saturday’s 4-1 Premier League win over Newcastle saw the Old Trafford crowd at fever pitch, with Pogba assisting twice to take his tally to seven for the season in just four matches.

United are unbeaten after four games this season – winning three of those – and sit top of the Premier League table.

Sky Sports News reported last month that Pogba was unlikely to sign a new contract during the summer transfer window – but that fact did not rule out an extension at some point.

FREE TO WATCH: Highlights from Manchester United’s win over Newcastle in the Premier League

Pogba continues to have a fantastic relationship with manager Ole Gunnar Solskjaer and the rest of the coaching staff and players. He loves the club but wants to make the right decision for him and his family.

It is clear that he is more open to committing to United compared to nine months ago when his agent, Mino Raiola, claimed it would be best if he left the club.

Real Madrid and Paris Saint-Germain are among a number of clubs who are interested in signing Pogba on a pre-contract agreement in January.

When asked about Pogba’s current situation, Solskjaer said: “It’s up to us to get results and to prove to ourselves that we can win trophies.

“It’s the most magical feeling in the world to be part of a winning Manchester United team.”

Solskjaer was speaking ahead of his side’s Champions League trip to Swiss side Young Boys, with the Manchester United boss adamant the club’s summer recruitment has given him a squad capable of competing on all fronts this season.

“We’ve had enough disappointments, that’s for sure, and some big moments as well,” he said. “But this team has grown and matured over the last few seasons. That was always the plan (when I came in), we said in three years’ time we’d have a squad with experience and quality that could challenge.

“With players like David (De Gea), Harry Maguire, who’s been here a couple of years, you get that spine in the team with experience and quality. With Raphael and Cristiano coming in that add to that.

“It’s not the last bit, you can never say it’s the last bit, but it’s that something that you have to buy unless you’ve already won it yourself.” 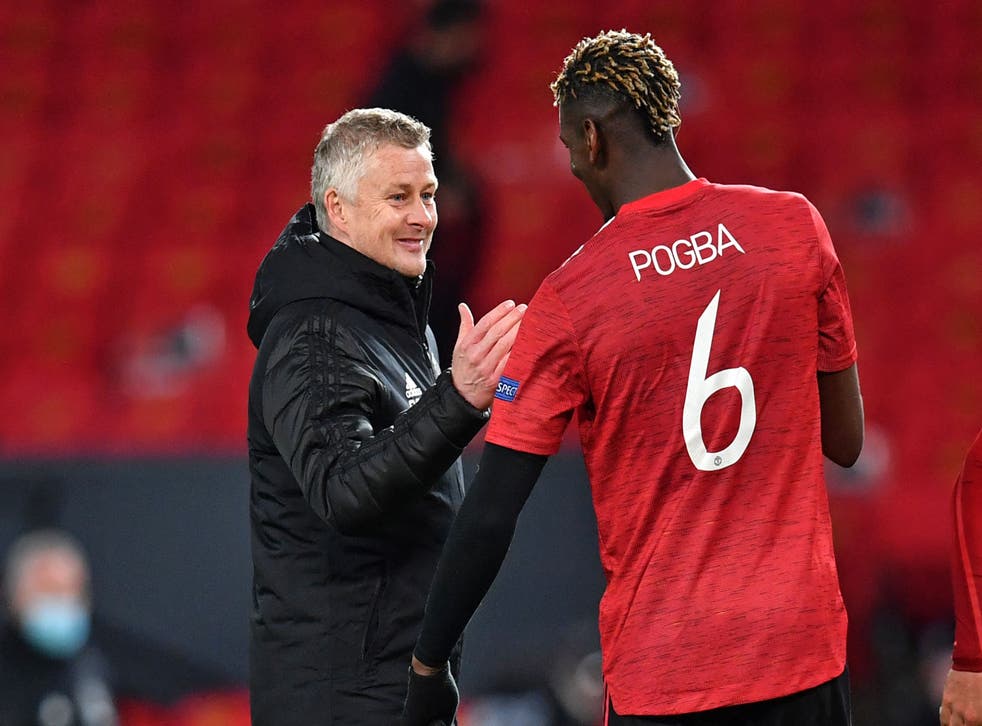 Gary Neville says the city of Manchester is ‘buzzing’ after the arrival of Cristiano Ronaldo at United.

“I walked out into Manchester’s city centre on Saturday morning and I’ve not seen it as alive for five or 10 years. What he’s done to the Premier League for interest is exciting but for the city, he’s absolutely got it buzzing with excitement – and this was even before he scored the two goals.

“I was at Salford and saw the news that he scored. I could only imagine what the atmosphere was like and I spoke to a couple of people who were there and they said it was out of this world, bouncing like they’ve never seen it before. And, Salford scored in the last minute which meant it was the perfect football day.”

Neville on… the quality of the Premier League

“In the first half of the Leeds game, I sat back and was marvelling at the speed, quality and atmosphere. We always tend to look back and say there was more tackling in the 80s and 90s, it was more real, standing on the terraces. But what I’ve seen in the first four weeks of this season, takes some beating in terms of quality. This is as good as I’ve seen.

“We lauded the players for being brilliant through Covid last season in difficult times and all the fans frustratingly having to watch at home. It was desperate at times with no fans in the stadium. But it’s more than made up for it at the start of this season – it’s a compelling watch. And Ronaldo coming back has put the cherry on top of a very good cake.”

Ronaldo’s return: How the superstar delivered

“For all the hype, this is the story of that boy Ronaldo and his ability with a ball. As Old Trafford revelled in his return, he cut through the noise with two goals and a match-winning turn in Manchester United’s 4-1 win over Newcastle.

“They have seen better individual performances from him here, but not for a long time, and never more remarkable than this. The expectation had been almost overwhelming but Cristiano Ronaldo did what he always does and now supporters will be wondering what it means for United’s prospects.

“Instantly, Ole Gunnar Solskjaer’s side are back on top, leading the way in the Premier League. With Ronaldo back in the building, back on the pitch, everything feels different.

“Now, they have a reason to believe they can stay there.”