Cristiano Ronaldo is back at Manchester United.

Having scored a sack full of goals and amassed a load of trophies since leaving Old Trafford, the Portugal forward has made a sensational return back to the Red Devils.

BBC Sport takes a look at the Ronaldo’s top 10 iconic moments and you can rank your favourites in order at the bottom of this page. 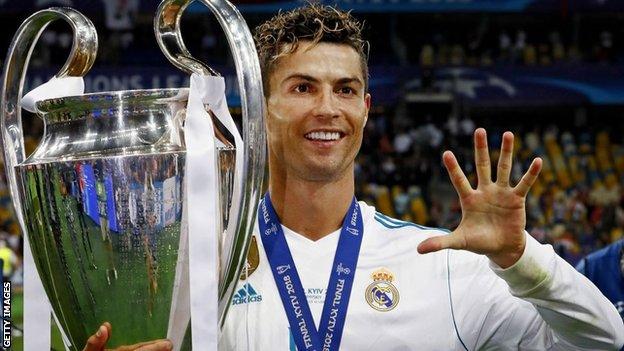 “At the start, no one had even heard of Ronaldo, but by the end, everyone knew about him.”

That was the view of former United defender Mikael Silvestre, who played against Sporting Lisbon in a pre-season friendly before the start of the 2003-04 season.

Ronaldo was persuaded to join the club by Sir Alex Ferguson after a dazzling performance in that friendly – and went on to play 292 games for United, winning the first of his three Premier League titles in 2007, as well as the Champions League, one FA Cup and two League Cups.

Ronaldo scored 118 goals for Manchester United, including a sensational screamer against Porto in the Champions League, picking the ball 40 yards out before rocketing a shot into the top corner.

The effort won the inaugural Fifa Puskas award for goal of the year.

United reached their second successive Champions League final, but were beaten by Barcelona in Ronaldo’s last match before he sealed an £80m move to Real Madrid that summer.

Ronaldo started to pay off the world record fee when he scored the winning goal for Real Madrid in the Copa del Rey final against bitter rivals Barcelona.

Ronaldo rose at the far post to power in a trademark header from Angel di Maria’s cross and deliver his first trophy for the club.

Ronaldo’s goalscoring record during his nine seasons at Real was astonishing, with 450 goals in just 438 games.

He became the club’s all-time leading scorer with a goal against Levante in October 2015, surpassing Raul who had scored 323 times.

The previous 2014-15 campaign had been the most prolific of his club career, scoring 61 times in 54 games at an incredible rate of, an average, a goal every 76 minutes.

Ronaldo finally tasted success on the international stage with Portugal, winning the 2016 European Championship with victory over France in the final in Paris.

But it was a bittersweet occasion for the captain as he was carried off injured in tears after just 25 minutes, but he came on to lift the trophy.

The latter came after a stellar 2016-17 season in which he spearheaded Real to the La Liga title and victory in the Champions League final, where he scored twice in a 4-1 win over Juventus.

A century of Champions League goals (2018)

His two goals against Paris St-Germain in the last 16 took him past the century mark and he remains the competition’s all-time top scorer, with 134 goals in 176 games.

Hand to his head, a look of disbelief on his face at what he had just seen, he turned and bellowed his approval. Ronaldo had leapt into the air before acrobatically firing into the corner of the net with an incredible bicycle kick.

The goal in the Champions League quarter-final was so good that even Juventus fans stood up to applaud the player, who would later go on to join their club.

Ronaldo won two La Liga titles and two Copa del Rey trophies at Real Madrid, but it was in Europe’s elite club competition where he became a true legend.

He had already won the Champions League in 2008 with United, but went on to win it four more times with Real. The first was in 2014 before a remarkable three times in a row in 2016, 2017 and 2018 to become the first player to win the competition five times.

Ronaldo reached another famous landmark earlier this year when his two penalties in Portugal’s 2-2 European Championship draw with France took him to 109 international goals.

That figure is a joint world record for men’s football held with Ali Daei, who scored 109 goals for Iran between 1993 and 2006.

Reaching the landmark further helped cement the 36-year-old’s standing as an all-time great.