Chelsea beat Villarreal 6-5 in a penalty shootout to lift the Uefa Super Cup for a second time after a draining 120 minutes in Belfast.

Substitute goalkeeper Kepa Arrizabalaga saved captain Raul Albiol’s spot-kick at Windsor Park on a night that began superbly for the Blues with an excellent first-half performance before the Spaniards stormed back into the contest after the break.

Hakim Ziyech opened the scoring midway through the opening 45 minutes but was then forced off with what looked like a worrying shoulder injury before half-time.

The Spaniards hit the woodwork either side of the break before Gerard Moreno equalised in the 73rd minute to force extra time. 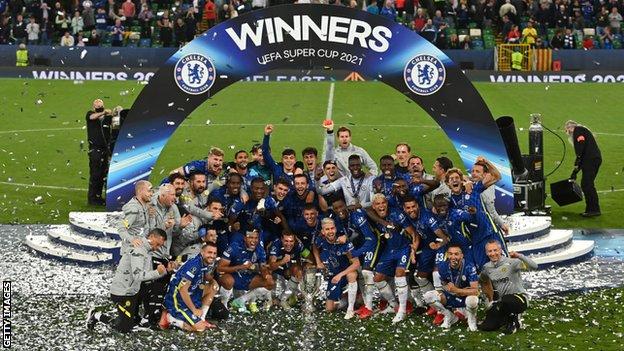 Chelsea, who look set to complete a deal to re-sign striker Romelu Lukaku for a club record fee of £97.5m from Inter Milan, failed to rediscover their first-half vigour in extra time but did come close to a winner through Christian Pulisic and Mason Mount.

It was the first time the Super Cup was played in Northern Ireland and 13,000 spectators generated a fantastic atmosphere in the south Belfast stadium, the highest attendance at any sports event in the country since the outbreak of the Covid-19 pandemic.

Kepa was brought off the bench by Chelsea boss Thomas Tuchel just a few minutes before the end of extra time and dived low to his right to save from Albiol – his second save of the shootout having also denied Aissa Mandi – and spark mass scenes of celebration among the Chelsea players and supporters.

Ziyech’s goal arrived in the 27th minute when the lively Kai Havertz ran on to a ball into the left channel and delivered a precise pull-back, with Ziyech directing his shot in despite not getting a clean connection.

Villarreal’s equaliser was the result of a poor clearance out of defence by Kurt Zouma, with Gerard Moreno feeding Boulaye Dia, whose clever flick-return to the Spaniard was clinically swept past Edouard Mendy.

It was an equaliser that looked like coming after Alberto Moreno crashed a volley off the underside of the crossbar in first-half injury time and Mendy had dived superbly to tip a Gerard Moreno shot on to the post after the keeper had initially given the ball away.

Ziyech injury a concern for Chelsea after commanding start

The opening 40 minutes were something of a stroll for Chelsea as they imposed themselves on Villarreal, not giving their Spanish opponents a glimmer of hope until just before the break.

The contrasting styles of captain-for-the-night N’Golo Kante and Mateo Kovacic in midfield provided a base from which to apply pressure on the Europa League winners, with Kovacic’s diagonal balls to Callum Hudson-Odoi on the right particularly penetrating.

Timo Werner had their first chance in the sixth minute, having his close-range volley well saved by Sergio Asenjo, while Kante flashed just wide from 20 yards before Zouma volleyed an excellent chance over the bar.

Ziyech then clashed with Juan Foyth and went down, requiring oxygen treatment and going off the pitch with his right shoulder having to be supported amid a chaotic closing few minutes to the first half.

Tuchel’s side looked flat as the second half got under way and were not helped when the inevitable host of substitutions began being made, though Villarreal deserve credit for taking advantage and giving their enthusiastic supporters something to cheer on their first Super Cup appearance.