Verstappen was 0.061 seconds quicker than Bottas, with Hamilton 0.167secs off the pace of his title rival.

Alpha Tauri’s Yuki Tsunoda had a crash at Turn Four that led to a red flag. 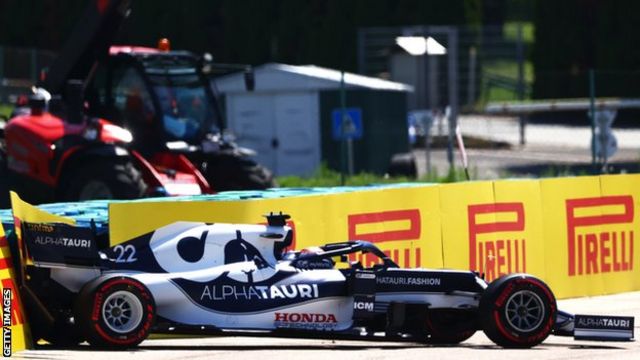 The corner, a high-speed left-hander over the crest of a hill, also caused problems for Alonso, who had a spin there early in the session, and Haas driver Mick Schumacher, who ran wide.

This is the first race since the dramatic collision between Hamilton and Verstappen at the British Grand Prix, which has led to bad blood between the drivers and their teams.

Red Bull’s attempt to get Hamilton a tougher penalty for the incident failed on Thursday when governing body the FIA rejected their bid for a right of review of the incident.

On Thursday, Verstappen reported his claim that Hamilton and Mercedes had been disrespectful in the way they celebrated their win following the collision, after which Verstappen was taken to hospital for checks.

Hamilton repeated his belief that he had done nothing wrong, and would drive the same way again.

He said he had phoned Verstappen in the days following the race “to check he was OK, and to let him know the respect is still there. Obviously it’s perhaps not reciprocated, but that’s OK.”

It is difficult to gauge competitiveness from practice sessions, but Hamilton’s running suggested he could perhaps have ended the session quickest.

He was unhappy with his car on his first flying lap on the ‘soft’ tyres, and set his fastest lap after a front wing adjustment on the same set of tyres, which by then would have been past their peak.

The gap between the top three and the rest suggests that Mercedes and Red Bull will again be in a league of their own.

Ferrari had been expected by some to be competitive after their strong showing in Monaco, but Sainz was 0.560secs off the pace, suggesting that the Italian team’s pre-event predictions that they could head the midfield but not challenge the top two teams may have been accurate.