The Milwaukee Bucks moved to within one game of their first NBA title since 1971 with a 123-119 win over the Phoenix Suns.

They overcame an early 16-point deficit with 43 points in the second quarter.

“One more to go,” Antetokounmpo said. “We’ve got to keep playing good basketball. We kept our composure, we kept fighting.

“This is the NBA Finals, so you got to give everything you got. And that’s what the team did tonight.” 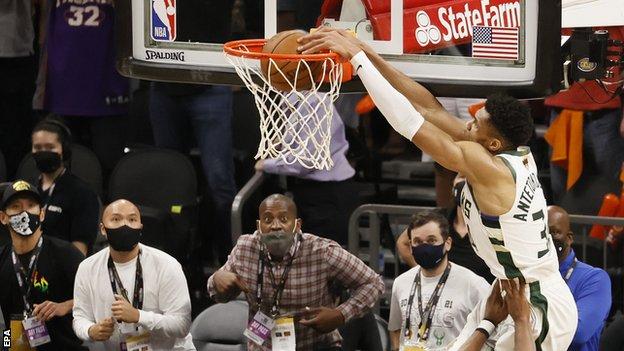 Jrue Holiday had 27 points and 13 assists and also made a key steal off Devin Booker late in the fourth quarter as Phoenix tried to stage a late comeback.

Booker hit 40 points for the second straight game and for the fourth time in this postseason campaign.

But Holiday’s steal led to a dunk from Antetokounmpo with 13.5secs left.

Although he missed the resulting free throw, Milwaukee regained possession and Phoenix fouled Middleton who scored one of his two shots to make it a two-possession game with 9.8secs to go.

“We knew this wasn’t going to be easy. We didn’t expect it to be,” added Paul.

“It’s hard. Coach said it all year long, ‘Everything you want is on the other side of hard’, and it don’t get no harder than this.”