After a truncated pre-season testing programme, cut in half by the pandemic, there is one tantalising question.

Is Formula 1 finally poised for that longed-for straight fight between Mercedes and Red Bull, Lewis Hamilton and Max Verstappen?

Yes, yes, I know. It’s hard to believe Mercedes will not be the team to beat this year, after winning the championship double for the last seven years, with teams required to carry over large parts of their car designs from a 2020, a year which Hamilton and his team utterly dominated. 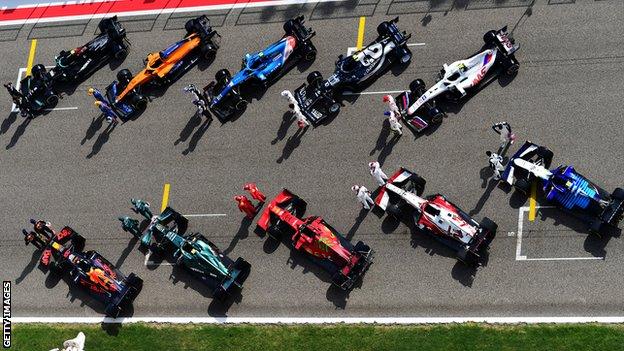 But Mercedes did not have a good test in Bahrain, and the drivers are struggling with the behaviour of their car. Red Bull, by contrast, gave many in F1 the impression that they were in the best shape over three days in Sakhir.

That, of course, is just a snapshot in time. Only a fool takes times from testing as serious indications of actual competitiveness. No-one believes the Mercedes is anything other than a fundamentally very quick car. And they have proved many times over the last seven years that they are remarkably adept at recovering from difficulties.

Problems, though, they certainly have.

What was wrong at Mercedes?

Mercedes’ test started badly, with a gearbox problem that deprived Valtteri Bottas of virtually all his running on Friday. When Hamilton took over the car in the afternoon, he was clearly having a difficult time, the car looking skittish and unstable. The seven-time champion was very obviously fighting the car, and had a number of ‘moments’ when he almost lost control.

Over the weekend, he actually did. Twice. Hamilton had a spin on each of the two days. It’s very rare for him to make these kinds of mistakes at all, even rarer for it to happen in testing, when there is nothing at stake, and rarer still for him to do it on consecutive days.

On its own, that would be enough to show that something was wrong. And the team did not trouble to hide it.

Bottas said: “I would say one of the big issues with the car is the rear end. It’s quite snappy and quite unforgiving and that, topped up with the new tyres that feel quite sensitive, sliding is not that easy.

“I’m trying to calm the car down a bit and that way get a bit more pace.

“It feels like we have made made some steps forward. We went in the right direction and it felt better. But still not 100% happy with the car.”

Hamilton’s assessment was starker: “I wouldn’t call it a struggle necessarily, just not quick enough. Lots of work to do. It’s going to be tough.”

As things stand, Mercedes do not know what is causing this rear instability. They will spend the 12 days between the end of testing and the start of practice in Bahrain on 26 March trying to understand it, and then find solutions for it.

Why were Mercedes struggling?

If it sounds counter-intuitive that a car that dominated in 2020 should be proving so difficult at the start of 2021 when many of the mechanical and structural parts of it are the same, that would be to underestimate the impact of some regulation changes introduced for this season.

Last year, tyre supplier Pirelli expressed concern that the speed of the cars was putting too much strain on its tyres – in fact, this led to a number of blow-outs in the course of the season.

The Italian company asked F1 and the teams if they could find a way to limit the usual performance improvements that would be found over the winter, and Pirelli in turn has built more robust tyres with a stronger structure.

These rule changes cut away a portion of the floor in front of the rear tyres and limit the size of the diffuser at the back of the car, both areas that are crucial in creating aerodynamic downforce.

Teams are free to make aerodynamic changes for this year, and they have been working on recovering the downforce lost to these rules changes. Many are confident they will have largely done so before too long, if not gone beyond last year’s downforce levels. But changes this significant have inevitably had an impact on the performance and behaviour of the cars.

That’s not to say the problems Mercedes are having are necessarily aerodynamic, even if aerodynamics are the biggest performance definer on an F1 car. They don’t know that yet. All they know is that the car is unstable at the rear and they need to work out why and fix it.

Hamilton said: “I don’t waste time worrying. That deters you from finding a solution. It’s better that it doesn’t go smooth now and then it goes smoothly when we get to racing. This is the perfect time to have the problems so I welcome that.

“No-one is fazed by it. We are a multi-championship-winning team, and we know how to pull together, keep our head down and focus on the job.

“It is impressive to see the speed of some of the other teams. Red Bull are looking particularly strong and it’s great to see McLaren looking strong and also Renault (Alpine).”

Asked if he believed Mercedes would be championship challengers this year, Bottas said: “I absolutely believe the car and the team have the potential to do so. I don’t think it’s yet there as a package in terms of performance, but I have no doubt we will work hard to find it somehow.”

How good were Red Bull?

While the Mercedes was nervous and unstable out on track, the Red Bull was the opposite. It appeared, by common consent, the single most impressive car in Bahrain over the last three days.

Verstappen ended the test fastest of all, and new team-mate Sergio Perez was fastest in the first session on Sunday before the Dutchman took over the car.

There were no major reliability concerns, and the car looked stable and quick on track.

Verstappen said the test had gone well: “What was most important was to get a lot of laps on board and understand the car and try things on the car. They were all responding like we would have hoped, so that was very positive.”

But after seven years of disappointments at the hands of Mercedes, Red Bull are not about to start taking anything for granted.

“The amount of times Mercedes has topped the testing in the last few years is not very high,” Verstappen said. “It is not about pure performance.

“I had positive feelings in the car, but we will find out at the first race where we are. It has been a good few days now but we always improve and try to be better.

“I don’t think we are the favourites if Mercedes wins that many championships in a row. I think it is still the same as before the test.”

Perhaps so, but the contrast with the start of last year is striking.

Then, Mercedes sailed through testing, while the Red Bull drivers were struggling keeping their car pointing forwards when the track turned.

This year, the roles have been reversed. Will it stay that way?

What about the rest?

It is notoriously difficult to get an accurate read on teams’ relative competitiveness in pre-season testing. The number of variables at play – fuel loads, track conditions, engine modes and so on – make it impossible to get a like-for-like comparison.

That said, the teams themselves have complex computer programmes, into which they feed mountains of data, both current and historical, and their algorithms usually throw out an approximate order that is pretty accurate, within a margin of error of about 0.3-0.5secs for each car.

This year, not so much, because in Bahrain there were even more variables than usual.

Tyre wear is higher at Sakhir than at Barcelona, the usual pre-season venue, so lap times drop off much quicker lap by lap, reducing the amount of useful data to analyse.

Testing starting at 10:00 local, running through the heat of the day when lap times slow, and finishing at 19:00, in optimum conditions in the dark under lights. As such, the track conditions varied much more than normal – there could be as much as a 1.5-second spread simply depending on the time of day, wind direction and so on.

And engine modes have a greater influence on lap time in Bahrain than in Barcelona.

The result is that the usual relative confidence with which engineers leave the test about the competitive order is not there this year.

This certainly applies to trying to compare Mercedes and Red Bull, but it is even more relevant immediately behind them, where the battle last year was tight and frenetic.

As a result, it is impossible for anyone to say how McLaren, Aston Martin, Alpine, Ferrari and Alpha Tauri stack up against each other. There are only impressions and generalities.

McLaren without question had a strong test, running reliably and apparently quickly at all times as they bedded in their new relationship with engine supplier Mercedes, and new driver Daniel Ricciardo.

Fernando Alonso appears to have come back to F1 after two years racing elsewhere as if he had never been away, and his Alpine team appear to be in decent shape.

Ferrari appeared to be struggling, at least until Charles Leclerc turned in an impressive-looking lap on the middle tyre compound in the hottest part of the day on Sunday. It was hard to get a read on them.

And the same goes for Aston Martin, formerly Racing Point, who had reliability problems and did very little representative running, prompting new signing Sebastian Vettel to say he was about 100 laps short of the mileage he needed to bed himself in with his new team and car.

If anything, it looks even tighter between these teams than in 2020.

McLaren team principal Andreas Seidl said: “We will see it will be a close fight between us, Aston Martin, Alpine and Ferrari. Alpha Tauri look very strong as well. With everything we could see so far, it all feels very close together again.”

A feeling, though, is all it is.